Bangladesh has a warm, rainy and humid tropical climate with temperatures climbing up to 45 degrees Celsius (113ºF) in summer. Most of the rural population of Bangladesh lives in corrugated iron huts that can become dangerously hot under the burning sun. Many homes have no electricity to operate affordable cooling devices, such as ceiling fans. A new social enterprise has had a simple idea to offer an inexpensive solution to the problem. Gray Dhaka, the Bangladeshi branch of the Gray advertising agency based in New York, and Grameen Intel Social Business, a social business information technology company created in 2009 by Grameen Trust and Intel, the ‘Eco-Cooler’.

In Bangladesh, the effects of climate change are already beginning to be felt. Rural people, who account for more than 60% of the population, are particularly vulnerable to rising temperatures. Unlike city dwellers, many of whom live in air-conditioned dwellings, the inhabitants of the countryside do not have this possibility.
Bangladesh is projected to be the most affected country in South Asia by global warming. Rising temperatures could reach an average of two degrees in the coming decades. A World Bank study of 2013 identifies Bangladesh as a “potential area of sensible impact” threatened by “increased flooding, cyclone intensification, rising sea levels and rising temperatures”. 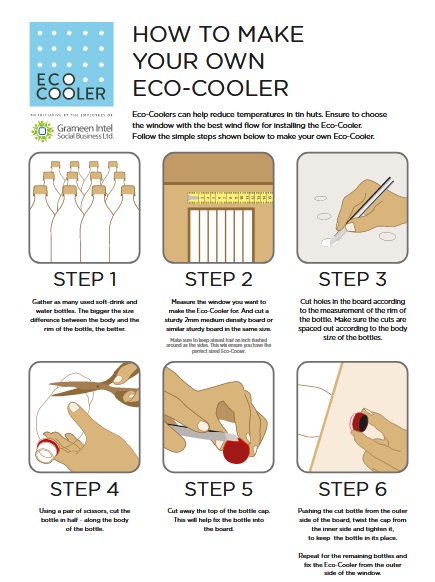 It is the simplicity of the Eco-Cooler operation which makes this invention particularly attractive: plastic bottles have a second life cut in half and fixed on a window-sized board or grid, the neck directed towards the inside the room. The panel attaches to the window dial. The process is as follows: the hot air entering each bottle is compressed at the neck, which refreshes it before it enters the room. Depending on the direction of wind and the pressure exerted, Eco-Cooler can reduce the temperature by five degrees, as much as an electric air conditioner.
The person who got this bright idea is Ashis Paul. The way in which the idea came to him is rather atypical. One day, hearing his daughter’s private teacher explain to her that the air cools down as the gas expands, the inventor who is sleeping in him begins to turn this simple law of physics in all directions, an idea arises: make an air conditioner from plastic bottles.

“Bangladesh is one of the poorest countries in the world. 80% of its population lives below the poverty line, without access to electricity or modern conveniences. […] From the very beginning, Eco-Cooler was designed to be manufactured and distributed by all – promoting the use of sustainable products with the lowest environmental impact possible. It was created to bring a little relief to the poorest communities in the country, “explains its inventor. 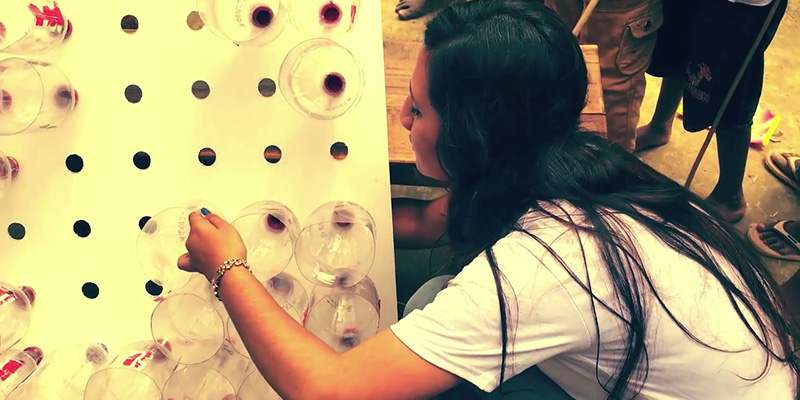 Gray Dhaka, the Bangladeshi subsidiary of the American advertising agency Gray, supported the project by designing a model and putting plans for the manufacture of such a free online air conditioner on the Internet. The agency has also teamed up with Grameen Intel Social Business Limited, a partnership between Grameen (the micro-credit bank founded by Mohamed Yunus) and Intel. Grameen presented itself as a natural choice for Gray because of its extensive location in the villages, where the agency was able to send its teams and show residents how to make an Eco-Cooler.

The process has already relieved more than 25,000 homes

In a country where the majority of the population lives in rural areas, where access to electricity is restricted, Eco-Cooler is a miracle. More than 70% of Bangladeshis live in corrugated iron houses, a material that amplifies the heat of the sun. In summer, air can become unbearably stuffy, with temperatures soaring up to 45 degrees.
The process has already relieved more than 25,000 country’s homes, attracted instantly by its simplicity and value for money. The invention is now in place in districts and villages such as Nilphamari, Daulatdia, Paturia, Modonhati and Khaleya.

This invention obtained a lot of positive reactions on social media. “This is amazing! Bangladesh’s #EcoCooler that runs without electricity could be the answer to rising heat,” Nileena tweeted. Sambeet Chakraborty writes on Facebook: “An incredibly simple idea to improve the lives of millions of people in Bangladesh”, while AR Mashrur Hasan Mukut points out that it is “an absolutely brilliant idea !! should all spread this idea to those who need it !! ”

Recently, many innovations, such as Eco-Cooler, have been launched in Bangladesh, especially for the less favored populations. This developing country is facing a host of economic, social and environmental challenges that require solutions off the beaten track. For these solutions to have a major impact, they must be simple, inexpensive and efficient. Eco-Cooler ticks all these boxes, and this is probably the reason for his immense success.

This technology is very simple. Customers can download the model for free and make an ‘Eco-Cooler’ at home by watching the above video that explains the process.

A supermarket in Berlin has set up a vertical farm inside its store. Since then, consumers

The Plastic Road project in the Netherlands gives new life to plastic waste, while, at the

Thirteen years back, San Francisco set a revolutionary goal: recycle 100% of its waste by 2020.

In an article last year, we featured a young Icelandic who produced
On 1st January 2016, the government of Mauritius banned the use of
Hydrao is a shower head connected in Bluetooth to a smartphone produced
A supermarket in Berlin has set up a vertical farm inside its
If in Europe severe winter weather is wreaking havoc, on other continents
Go to Top