Hydrao is a shower head connected in Bluetooth to a smartphone produced by Smart & Blue. Self-powered by a turbine, it illuminates the jet according to the volume of water consumed. An ecological objective which is accompanied by a playful dimension. 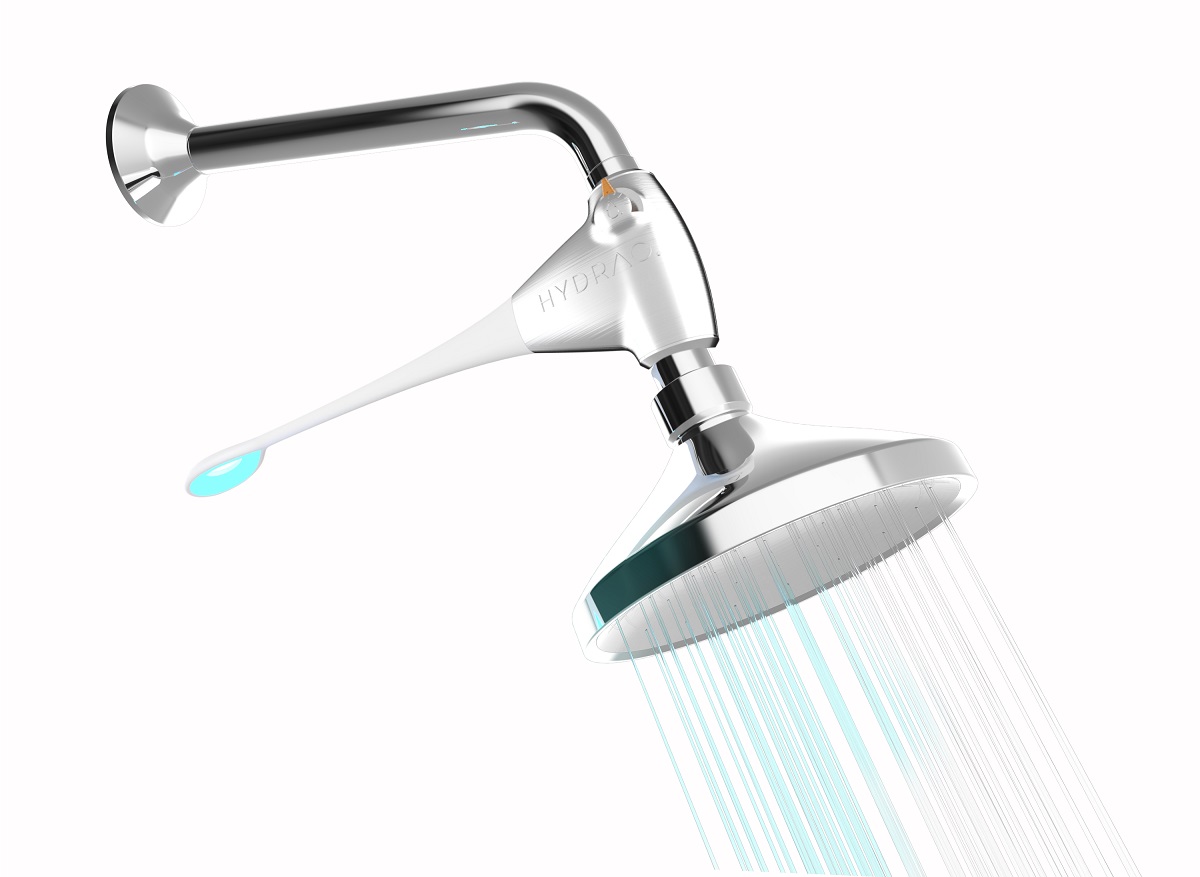 The Hydrao pommel has undergone a slight evolution and becomes Hydrao First last year. On the form, the design was entrusted to Sofian Tallal and the LEDs are a little brighter. On the other hand, it is now equipped with anti-tartar pins. The French start-up also announced that the Hydrao First would allow more savings (+ 25%), and that the “shower experience” would be “improved”, especially when the pressure is low.

The main objective of the Hydrao shower head is the saving of water and energy. It is indeed equipped with a turbine whose objective is twofold: on the one hand to supply electricity to its electronic components; on the other hand to measure permanently the flow of water. This information is transmitted to a group of LEDs that emits a different color depending on the number of liters that has flowed since the beginning of the shower. For example: green below 10 Litres, blue from 10L to 20L, red from 20L to 30L and red flashing above 30L. Beyond the usefulness of these LEDs, there is no doubt that many users, and especially children, will be seduced by its playful dimension.

The colour does not therefore indicate the temperature of the water as might be expected. It should be noted that the Hydrao does not incorporate a temperature sensor. This would have been useful to refine the calculation of the energy needed to heat the water. Otherwise, it is calculated on a flat-rate basis considering that the heating cost of a 5-minute shower is € 0.50.

Moreover, the Hydrao is connected to a smartphone (iPhone or Android) for which the manufacturer has developed an application that displays the water consumption of the last shower, the history of showers and the evolution of savings. In addition, a savings simulator can be used to calculate annual earnings. The application also makes it possible to modify the ignition thresholds of the different LEDs. For example, it could be decided that the red LED only starts flashing from 100L.

In addition, the application data can be customised for each member of the family, which can monitor individual consumption. Launched at a price of around 70 €, the Hydrao is immediately available.

An application that displays the water consumption of the last shower 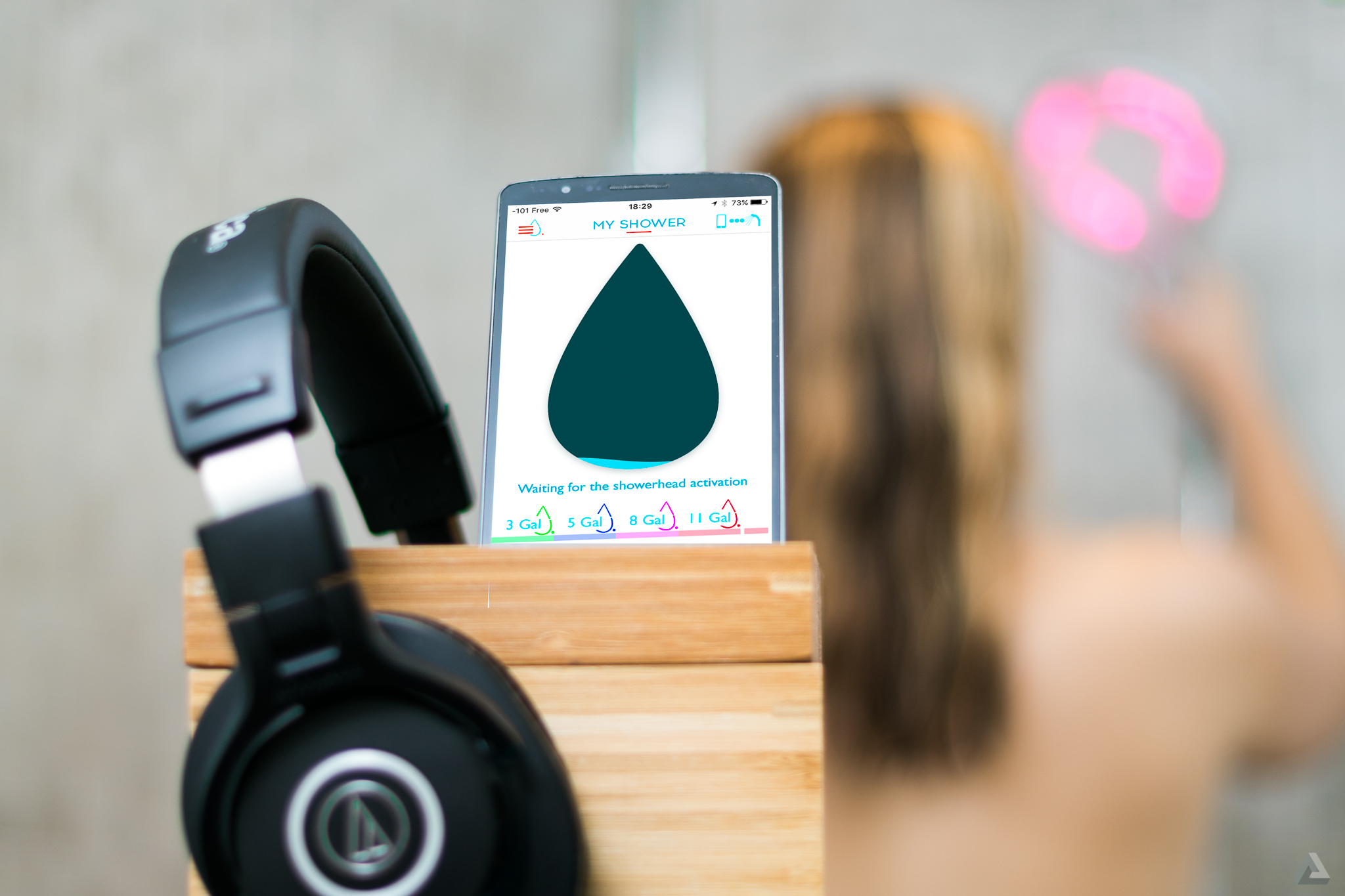 The Hydrao Loop is available in two versions, one is a knob intended to be screwed to the end of a shower hose. The other is a shower head. On the other hand, their form is identical: it is that of an 8, or rather of the sign ∞ (infinite), which according to the manufacturer represents the cycle of water. The Loop incorporates 8 coloured LED lamps and 50 water jets. The colour of the lighting changes throughout a shower, according to the volume of water consumed, according to thresholds that can be defined with the application Hydrao Smart Shower. It also shows the history of the consumption of the previous showers, for the whole family or for each of its members.

The Hydrao Drop brings the same functionality to a traditional shower. It comes to screw itself just upstream of an existing pommel. It will then be able to illuminate its jets, measure flow and transmit all this information to a smartphone running the Hydrao Smart Shower application.

Pierre Blanchet wanted to save the planet by enrolling in a Master’s degree in renewable energies.

At the Jardin de Valériane which rides between Saint Etienne and the Rive-de-Gier in the Loire,

Developed under the auspices of the Dutch artist Ap Verheggen, SunGlacier DC01 is currently exhibited in

In an article last year, we featured a young Icelandic who produced
Bangladesh has a warm, rainy and humid tropical climate with temperatures climbing
On 1st January 2016, the government of Mauritius banned the use of
A supermarket in Berlin has set up a vertical farm inside its
If in Europe severe winter weather is wreaking havoc, on other continents
Go to Top