Last week we showcased the Bird’s Nest, one of the seven sustainable lodgings within the Treehotel in Sweden. This week … More

In the extreme heat conditions of Senegal, Mauritania and Mali, three countries affected by famine, an Italian scientist got a … More

The house of Ingrid and Benjamin Hjertefølger, surrounded by a garden, protected from the cold by a glass dome and heated by solar energy, is autonomous and sustainable.

On the island of Sandhornøya in Norway, a family has lived since December 2013 in a funny house. The three-storey building is built under a geodetic dome made entirely of organic materials and protects them from the harsh conditions of the Arctic environment.

The Arctic Circle is not one of the most hospitable places in the world. Between frigid temperatures, high winds and snowstorms, living in this area may seem rather rough. But the Hjertefølger family has something to change their minds. For the past three years, this Norwegian family has lived in an unbelievable house. Nicknamed “Nature House”, it is located on the island of Sandhornøya 1,000 kilometres north of Oslo and has a very special shape. It is built under a geodesic dome, a semi-spherical structure made of triangular elements and completely transparent. 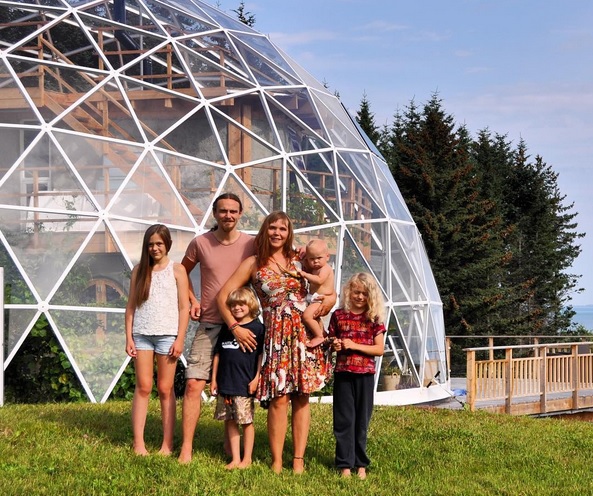 The Hjertefølger bought this dome from Solardome but the interior was entirely designed by them. A fully eco-friendly house composed of three floors, their home was built primarily with organic materials such as earth, wood, clay and sand. But with the dome, it easily manages to resist and protect its inhabitants from extreme temperatures and violent winds. All with a breathtaking view of the landscape regularly bathed in aurora borealis. “The feeling you feel when you enter this house is different from what you can feel when you enter any other house,” Ingrid Hjertefølger told. “The atmosphere is unique, the house is quiet, I can almost hear the silence.”

An experiment that is inspiring visitors around the world

But Ingrid and her husband Benjamin did not stop at a simple construction for their Nature House. The couple also thought of its existence on a daily basis. In addition to their five-bedroom home, they have designed a garden to grow fruits and vegetables. If it is impossible to grow anything in winter, the sun is absent for three months, the rest of the year the Hjertefølger family can harvest apples, cherries, tomatoes, herbs and melons on the doorstep .

With their four children, Ingrid and Benjamin also recycle water to water their plants and make compost with their waste. Three years after moving, the couple no longer imagine leaving their haven. “The house works as we thought and wanted it, we love the house, it has its own soul, it is very personal,” Ingrid explained. “We were surprised by the fact that we rebuilt ourselves as we built the house. The process changed us, shaped us,” she added. And their experience has not failed to inspire other people across Norway and the world. “I receive weekly e-mails from foreigners who tell me how much they love the house,” she concluded.

The small family now hopes to organize workshops, courses and tours in his “eco-friendly” house and even build additional cabins for visitors.

In order to make your fastest meals come together with eco-responsibility, German company Leaf Republic has

In Bavaria (southern Germany), a small town is breaking energy records. Its 2600 inhabitants are producing

If in Europe severe winter weather is wreaking havoc, on other continents drought is a serious

In Europe, accommodation is becoming extremely expensive. In big cities, like London,
Whisky lovers will feel at home in the Findhorn barrels. Manufactured from
The Scandinavian design already has a reputation for modernity, audacity and a
Last week we showcased the Bird’s Nest, one of the seven sustainable
Fans of nature you intend to go on vacation but you are
Go to Top