“The first time my friends saw me rummaging through a trash can, they thought I was going crazy, recalls  Robert Tedonfo. They ran to tell my aunt to check with her own eyes.” Patiently, the young man, aged 26, will attempt to explain what it does: collect packaging and plastic bottles in the trash of Yaoundé, the capital of Cameroon, to make “green” paving stones, useful for the construction of roads and houses. 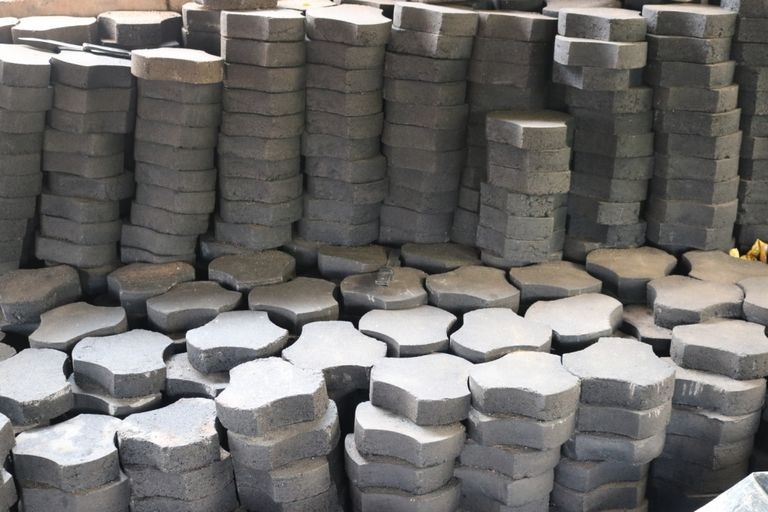 “I even invited her to come to the laboratory to prove that I was not going into a cult as she thought,” says Robert. This Thursday, the “laboratory”, an open hangar in Essos, covered with corrugated iron, is active. A metal tank is heated on a wood fire. Packaging bags and plastic bottles are placed next to it.

With a degradation time estimated between 500 and 1000 years, plastic waste is according to statistics, 10% of the six million tons of garbage produced each day in Cameroon. Since April 2014, the government banned the manufacture, importation, marketing and use of non-biodegradable plastic packaging of less than 61 microns on the whole national territory. Several hundred tons were seized since the ban.

Despite the establishment of operational brigades, these non-compliant packaging are being smuggled into the black market. Without a recycling plan, the government is struggling to find solutions. However, some young people like Robert are trying to “clean up their environment.”

In a tank heated to over 200 degrees and powered by a wood fire, they pour plastic packaging. Armed with mixers and protected from the toxic smell by mufflers, they stir the mixture until a homogeneous paste from which emerge flames. “This is the time of the bottles,” says Robert, the face dripping with sweat. Docile, Elvis, his assistant, runs. And the bottles disappear in the flames.

Then Elvis runs to another hangar, smaller than the “laboratory”, to pick up sand that sifted. Three buckets of five liters are poured into the tank. Once again, Elvis and Robert are sweating profusely and are stirring. Fifteen minutes later, everything is ready. The paste is poured into a mold which gradually shapes the “green” paving stones.

Plastic has degradation time estimated between 500 and 1000 years

Based on laboratory results of the Cameroon civil engineering, these pavers are three times more resistant than those made with cement: they can support up to 50.5 tons of load. “The others only support between six and twelve tons, says Pierre Kamsouloum, consultant trainer in technical plastics recycling waste and technical director of the Foundation Heart of Africa. The price per cubic meter of our pavers, which comprises between 26 and 33 pavers are about 6.5 Euros instead of up to 38 Euros with other materials. ”

“This work fills me with joy because it helps make my city cleanest and help people, said Robert. When there are orders, we can manufacture more than 300 pavers per day and we deliver to individuals.” But, still unknown to the general public, the demand is still sporadic.

For the environmentalist Lucien Yoppa, the management of plastic waste is a promising sector. The dynamism of young Cameroonians, mostly unemployed, should help to promote it to the authorities through “its social and environmental character.” “Plastics cobblestones could be used for the construction and rehabilitation of highways and roads. They, thus, come as a substitute for cement pavements that are twice as expensive, he adds. The products of this recycling have an obvious market, either internationally or locally. “

On 1st January 2016, the government of Mauritius banned the use of plastic bags. While Mauritians

There is neither aroma nor artificial additives in this Texan coffee. The cups are recycled or

Uruguay waste is piling up and materials are lacking. However, an association called Tagma decided to

Over 5 trillion pieces of plastic currently litter the ocean. Each year,
At Älmhult in Sweden is the headquarters of IKEA, a brand that
Adidas reveals its Parley swimming collection designed with Parley Ocean Plastic. This
India is confronted with a huge waste problem. Plastic is one among
Indonesia is facing the scourge of plastic waste that pollutes the environment.
Go to Top