In Brachoua, Morocco the locals just wanted to meet their food needs but, in the end, they did much more than that: a wonderful example of collective will which inspired photojournalist Stéphane Ferrer Yulianti.

It is a story rooted in reality, and one that would not exist without collective will and action! Located at 50 km from Rabat, the villagers of Brachoua lived for a long time without running water or electricity. The precarious situation of the 60 families living there was made even more difficult by the lack of economic resources. This has pushed the villagers to regroup within the “Agriculteur moderne” (Modern Farmer) Association and to seek solutions that work. Assisted by the Association Ibn Albaytar (AIA), they embarked on the adventure at the end of 2013. 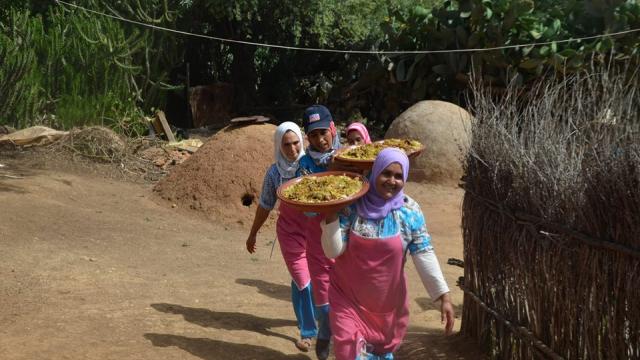 “During our first contact with the members of the NGO “Agriculteur moderne”, we showed them an organic farm near Rabat. The idea inspired them and they offered to duplicate the same patterns at home, “says Mohamed Chefchaouni from the Ibn Albaytar Association (AIA).

The villagers, like real managers, visited the organic farm, tried to identify and understand the techniques and decided to develop permaculture to ensure their food self-sufficiency.

According to Stéphane Ferrer Yulianti, “Permaculture is the antithesis of monoculture (dominant agriculture in Western countries) and it is inspired by the natural culture. It promotes synergy and osmosis between different plants to respect the earth, respect the environment and respect the human. It is one of the alternatives of tomorrow’s agriculture.”

The concept of sustainable development introduced

At the same time, this activity provided the village with an additional economic resource in the face of a growing demand for organic products generating significant revenues. With the help of a few members of the “Incredible Edibles“, the work began with the introduction to the vegetable garden for the benefit of the villagers and students of a school in the region. This operation introduced the first notions of sustainable development in the community of Brachoua. From 2013 to 2015, the number of gardens has increased from 1 to 40. Enough to provide enough food for all families!

But the adventure does not stop there. Noting that their production was very appreciated by the people in the vicinity and elsewhere, these new followers of the permaculture decided to propose the fruit of their work to the inhabitants of the neighbouring city …

Without going through the souk, they have constituted an urban clientele to whom they distribute every week baskets 100% made of their products (chicken, eggs, couscous, vegetables …)
Their baskets are in so big demand that villagers can even afford to sell more than at the souk (example: their chicken costs about € 6.70 against £ 4.90 at the souk).

But, once again, the story does not stop there! With a beautiful couscous as a standard, the village of Brachoua seduced the surrounding areas and is a publicity hell. As a result, tourism is exploding! Every week, nearly 250 people come there to savour the local gastronomy, go hiking and admire the beauty of the village and the landscapes!

Realisation of a documentary on the project

Stéphane Ferrer Yulianti is a student in photojournalism at the University of Perpignan, France. A lover of travel and socialising, he is also sensitive to the environment and tries to highlight ecological alternatives to our lifestyles. This is how he decides to make a documentary, through crowdfunding on the Ulule platform, on permaculture in Morocco. “As part of my studies in photojournalism at the University of Perpignan, we must present an individual project like a photo essay and a video documentary on a free theme. This individual project influences a lot of the grade and getting through our exams. That is why I chose to do the documentary on permaculture in Morocco, in a village where I had to go during a previous trip in October 2016. In addition, a Moroccan close friend would help me on interviews, translations, integration and management of audio-visual material, “explains Stéphane Ferrer Yulianti. We propose you his report on the subject which is in French entitled «Brachoua – a vegetable garden in the desert».

The Republic of Guatemala, with an estimated population of about 15.8 million, is the most populous

The small village of Saint-Pierre-de-Frugie in Dordogne, France, had the abandoned look
The Loess Plateau is known as the cradle of Chinese civilization. Formerly
Go to Top