In order to meet the commitments of the Paris Agreements after COP 21, we must be inventive. In addition to a technology that allows CO2 to be extracted from the ambient air and not only from factory chimneys like other technologies, Climeworks values this gas, whose excess emissions upset the climate. In Zürich, a greenhouse will soon be fed by the company’s modular sensors. Already an Audi partner, Climeworks also discusses with soda water producers for an industrial ecology application when waste becomes a resource.

At the beginning of June 2017, the first commercial plant dedicated to the capture of CO2 from the air has been commissioned. It is based in Hinwil, about 5 kilometers east of Zurich, and is operated by the Swiss company Climeworks. Founded by engineers, Christoph Gebald and Jan Wurzbacher, Climeworks has regrouped the largest team of experts in the field and developed high quality testing and production facilities.

“The factory” is in the form of 18 large fans placed in cubes stacked in three rows. Their blades stir the air in order to circulate it against a filtering material on the surface of which it is going to bind chemically. This operation is carried out at ambient temperature. Once the filters are saturated, it is sufficient to heat them to 90°C. in order to detach the CO2 molecules which are then found again in the gaseous state.

Since the operation is carried out in a vacuum, the Climeworks plant can then dispose of a gas composed almost exclusively of pure carbon dioxide … which the company intends to sell. Unlike many prototypes that position themselves more in the carbon offset market, Climeworks hopes to make CO2 a commercially exploitable resource. CO2 can be of interest in many markets: greenhouse crops that need to replenish their plants in carbon dioxide, to gasify drinks or help to make biofuels … 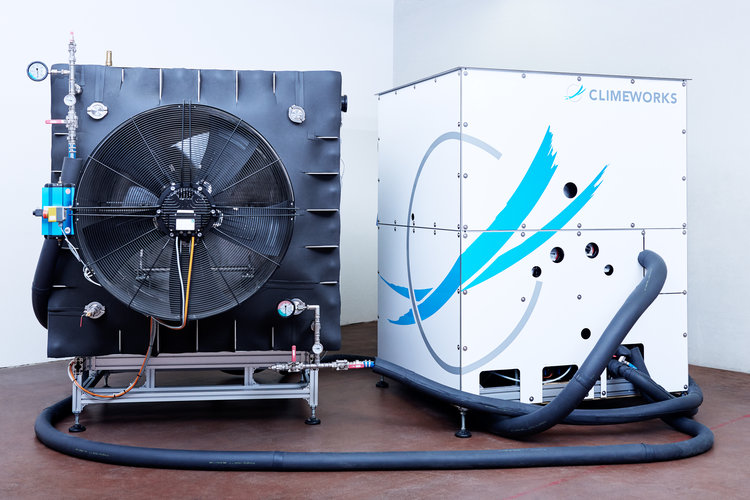 According to figures provided by Climeworks, this first facility could extract 900 tons of atmospheric CO2 per year. For comparison, a car emits on average 2 tons of CO2 per year. The main objective is to prove that the device, which is operational in the laboratory, operates on an industrial scale. Because even if the plant actually removes some of the CO2 from the air, it is essential for the researchers to check that the overall carbon balance of the device is negative. Indeed, in order to run its fans, this plant will consume a large amount of electricity … which must not produce carbon; otherwise it will reduce or even annihilate the environmental benefits of this installation.

It should be noted that the process of regular cleaning of filters by heating should consume little electricity since the heat needed for the operation will be emitted by a neighbouring incinerator, from a company, Kezo. It, moreover, should supply the device with electricity. Climeworks will keep working to realise its mission to capture one per cent of global  emissions by 2025.

While this facility is the first of a size that can be described as industrial, it is not the only one of its kind. Other companies are also working to extract carbon dioxide from the air. These include the prototypes of the Canadian company Carbon Engineering or, to a lesser extent, the recent installation of experimental Morris columns filled with photosynthetic algae. According to Dr. Joeri Rogeli, from the International Institute for Applied Systems Analysis “Carbon-dioxide removal has become an inescapable part of limiting climate change to safe levels.”

But even if these devices prove to be functional, they should not make us forget the imperative need to act on the main lever: to reduce CO2 emissions from human activities, as committed by the signatory countries The Paris Agreement in December 2015.

India, which faces a huge pollution problem, is multiplying ecological measures. We recently introduced you to

And if it were enough to paint the roads in white to
Designed by the start-up Green City Solutions, the CityTree project aims to
Skiing is definitely a fun activity but it also has a considerable
This international agreement comes as a hallmark for the protection of marine
It is a big environmental step in France. There will be a
Go to Top