There is no doubt about it anymore! Your dog is a real source of renewable energy. Océane Izard, a young Swiss designer, created the Poo Poo Power: a machine that transforms your dog’s faeces into electricity.

Fecal matter as renewable energy is not new but the trend is still at en embryonic stage. A Swiss designer joins the movement by turning dog’s faeces into a home energy source.

Definitely facing a major challenge of our civilization, the energy use of natural resources, human genius innovates without limit and reconciles us with the human being, capable of the worst but also of the best. Being vulnerable by its battery-dependency, our connected society is urged to find new sources of energy, essential to maintaining our energy-intensive lifestyle.

If at a time the transformation of human and animal stool into renewable energy resources made us smile, this is no longer the case. Hence Swiss designer Océane Izard presented the Poo Poo Power at the Animal Party exhibition of the design week in Milan. Still at an experimental solution but its concept brings an answer to the problem that all the cities of the planet are experiencing: dog shit. How can they avoid rotting streets, sidewalks and lawns? How not to just simply throw them away after cleaning? By turning each excrement into a power source that will recharge your electrical appliances in your home.

To feed an entire house, six dogs per person would be needed.

In order to make this ecological blessing possible, Océane Izard proposes an invention that on paper would seem almost too simple: you place the poo of your dog in a biodegradable bag, a special bacterium transforms it into methane which is then transformed into electricity which is stored in mobile batteries. They are used to recharge your devices. 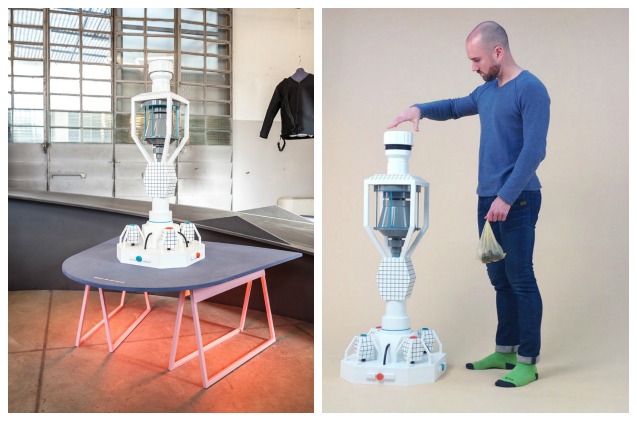 According to the creator of the device, a Beagle produces about 250 to 340 grams of droppings per day, which corresponds to the use of a fan for two hours, whereas a German Shepherd can produce twice as much and thus feed a refrigerator during a whole day. Six to seven dogs per person would be needed to feed an entire house, she says.

For cities and the environment, the commercialization of this invention, or another similar, would be very good news. First, in the UK 1,000 tonnes of dog poo is created each day by about eight million dogs and those of sidewalk poo are very expensive to clean. Second, in the United States a large majority of the 10 million tonnes of annual canine faeces land in landfills, releasing greenhouse gases into the atmosphere. A recent study by the City of Seattle also highlighted their impact on bacterial pollution of water. Another study showed that abandoned dog excrement can be both harmful to humans and the environment. Dog waste carries a large number of parasites – including hookworms, ringworms, tapeworms and Salmonella. These parasites can cause digestive upsets, and in some cases, even blindness.

Dog waste is also full of E. Coli and other dangerous bacteria including fecal coliform bacteria, which causes serious kidney disorders, intestinal illness, cramps and diarrhea in humans. “The future of the poo is there,” says Océane Izard.

The city of San Francisco had tried to implement on a large scale the new green energy in 2006, without following. Since this project, The Spark Park has been aiming to use dog droppings to feed the lights of urban parks, and the Detroit Zoo announced last April its ambitious energy self-sufficiency plan thanks to the 400 tonnes of stools produced each year by its animals.

In Bavaria (southern Germany), a small town is breaking energy records. Its 2600 inhabitants are producing

Apple waste could be a crucial element in the energy revolution. A new carbon-supported material based