It is stored underneath our steps. Naturally generated and stored within the Earth itself, geothermal energy is an extremely precious … More

In northern Europe, an artificial island project was proposed by two companies European companies with the objective of providing clean energy to about 80 million people.

The development of a large renewable European electricity grid in the North Sea has been confirmed in Brussels on the occasion of the North Seas Energy Forum. Mel Kroon President of TenneT TSO B.V. and Torben Glar Nielsen of Energinet.dk signed an agreement in the presence of Maroš Šefčovič, EU Commissioner for Energy Union ICI.

TenneT, a German-Dutch group, and Energinet, a Danish company, unveiled plans for this green energy production last January. In a press release they provided plentiful details on their cooperation. “This is an important step towards achieving our vision and the 2050 climate targets formulated in the Paris Agreement (COP21).

Discussions with other potential partners are under way, which include not only other North Sea Transport System Operators (TSOs) but also other companies for the infrastructure. The objective is to reach a multi-stakeholder consortium to carry out the proposed North Sea (offshore) wind power plant.

By developing the Sea Wind Power Hub, TenneT and Energinet.dk want the energy transition to be feasible and affordable. At the heart of this plan is the construction of one or more islands, called Power Link Islands, with interconnections with surrounding countries, in the middle of the North Sea (Dogger Bank). Many wind farms can be connected (between 70,000 MW and 100,000 MW), which will allow the generated wind power to be distributed and transmitted via direct current (DC) lines in the Netherlands, Denmark, Germany, Great Britain , Norway and Belgium. The transmission cables will simultaneously function as interconnections between the energy markets of the countries. In addition, these “wind connectors” will enable countries to trade in electricity.

Mel Kroon, CEO of TenneT, said: “This project can make a significant contribution to a renewable electricity supply in north-west Europe. TenneT and Energinet.dk have extensive experience in the fields of terrestrial networks, the connection of offshore wind energy and cross-border connections. TSOs are best placed to play a leading role in the long-term development of offshore infrastructure. I am pleased that we are developing this project with our Danish colleagues and I look forward to the participation of other transmission system operators and possibly other partners. ”

On his part Peder Østermark Andreasen, CEO of Energinet.dk said: “The offshore wind has become increasingly competitive in recent years and it is important to constantly focus on further reductions in network connection prices and interconnections. We need innovative and far-reaching projects so that the offshore wind can play an even more important role in our future energy supply. 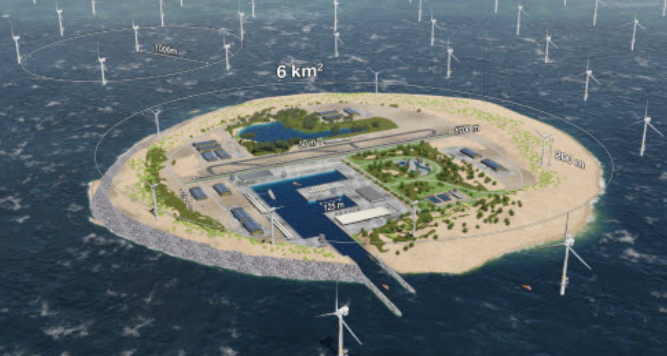 Solar and wind energy will be needed on a large scale, since the achievement of the European CO2 reduction targets is largely based on electricity produced in a sustainable manner. Wind and solar energy complement each other: there is more sun from spring to autumn, and more wind in the colder and shorter months of the year. This requires optimal cooperation and synergy, as it cannot be achieved by the Member States. The European political declaration of 6 June 2016 on energy cooperation between the countries of the North Sea is an important step in this direction.

The vision of the three TSOs is a starting point for a common European approach until 2050 and focuses specifically on the development of the North Sea as a source and distribution centre for energy transition in Europe.

The location of the Power Link (Island) must meet a number of conditions that correspond to the Dogger Bank, optimum wind conditions, a central location and relatively shallow water.

Large offshore wind farms will connect to a Power Link. Far-shore parks will therefore be close to a coast and economies of scale will reduce costs. The DC lines will be doubled as interconnections. The efficiency of these lines will increase significantly. Maintenance, component and assembly workshops can be set up on the island, optimising and simplifying the complex logistics at sea. The area is relatively shallow and the cost of building the wind farms and the island will be reduced.

The North Seas Energy Forum brings together representatives from the public, private and non-governmental sectors in the North Sea region. Power Link will serve as a basis for transmitting the wind energy generated to future interconnected North Sea countries: the Netherlands, Denmark, Germany, Great Britain, Norway and Belgium.

For many of us, energy is an important issue. Whether it is for saving money or