India is the third polluter of the planet behind China and the United States of America. Its coal plants still generate 60% of its electricity production. Like its neighbour China, the country is obliged to begin a forced energy transition, since in many cities the air is polluted on average four times higher than national standards levels. Thus, on July 14, 2017, the Indian Prime Minister Narendra Modi inaugurated the first solar train of the country. The project initiated by Indian Railways is in its early stages: if the tests are successful, it is expected that 50 other train carriage of this type will be built.

An integral and essential part of the Indian transport network, the train is now also obliged to evolve with its time to meet the ecological imperatives. Called “DEMU” (for Diesel Electric Multiple Unit), this e-train is made up of six wagons on which are fixed 16 solar panels. This technique that has already been tested elsewhere but rare to this day. Through voluntary policy, the country wants to set an example and especially reduce its consumption of diesel, which is particularly polluting.

In India, rail transport is not just a matter of detail. The country has the 4th largest railway system in the world with 65,000 kilometers of track. The numbers are staggering. Each day, trains carry more than 3 million tonnes of cargo and 23 million passengers. The sector thus plays an important economic role which influences the country’s energy balance.

The official objective of the new train is therefore to reduce the consumption of diesel, a polluting fossil fuel that is currently fuelling trains, and thus make the network a little greener. In practice, the electricity produced will not be used to power the driving force, but rather the cabin bulbs and the fans and other electrical systems inside the train. The installation should allow 72 hours of on-board facilities. The cars will therefore always be driven by a diesel-powered locomotive. According to press figures, 9 tons of carbon can be saved per solar panel every year.

Railway Minister Suresh Prabhu calls it ‘path-breaking leap’ towards making Indian trains more environment-friendly. The Union Minister said the country is trying to increase the use of non-conventional sources of energy.

With 1 billion 300 million inhabitants, energy independence is a major problem for India. All the more so because the use of fossil fuels is the source of important local pollution (in addition to climate change), so that air quality has turned into a real public health issue: Of the 20 most polluted cities in the world, 10 are in India. The World Health Organization (WHO) estimates that pollution will cause more than one million victims each year. While much of the pollution is caused by the intensive use of coal as primary energy, diesel consumption has also become a problem since its impact on the environment is better known to scientists. 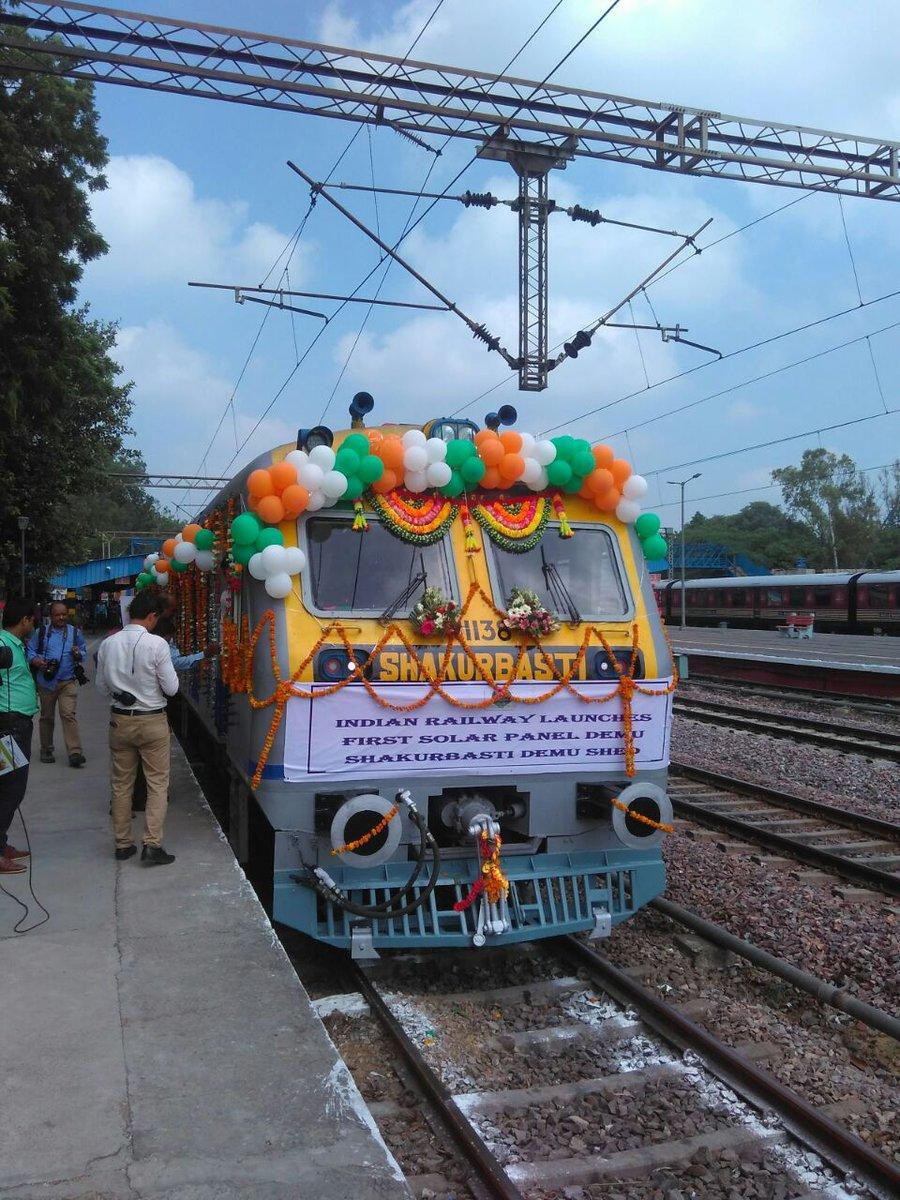 Aware of the need to clean up the air, the Indian government is communicating its desire to encourage the consumption of alternative energies and to initiate concrete efforts to change the country’s energy mix towards a more sober and sustainable model. However, the news is always regularly marked by the peaks of pollution murderers. If the government wants to focus on solar energy, to support the development of the country and to democratise access to electricity, in fact, the country continues to focus on coal.

Taken by the collar by the negative consequences of their own development, India and China are seeking to find a solution to the real headache they face: reducing pressure on the environment while meeting the aspirations of development of the many inhabitants still living in extreme poverty. And which developed countries could give them lessons? For the Indians, this “solar train” demonstrates a real willingness to begin a transition because under the Paris Climate Agreement (COP 21) ratified in October 2015, India plans to increase to 40% the share of renewable energies in its electricity production by 2030.

More than 95% of the 10 million Burundians do not have access to electricity. The mayor

At least one appliance using solar or wind power per home. This is the goal set

More than 95% of the 10 million Burundians do not have access
For many of us, energy is an important issue. Whether it is
The people of Qinghai province in northwest China have been lit and
Despite the fact that Donald Trump signed a decree abrogating Barack Obama’s
There is no doubt about it anymore! Your dog is a real
Go to Top