A planetary call to ‘Break Free’ from fossil fuels

Australia, Turkey, Philippines… Throughout the month of May, activists have mobilised to put some countries to face their contradictions. Because … More

Recycle your plastic from machines you yourself create

Create jobs while preserving nature. This is the ambition of Precious Plastic, which has developed a series of machines to … More

French cities to be powered by water from rivers

The water current: difficult to find a cheaper and cleaner source of energy. However, the giant dams are often not … More 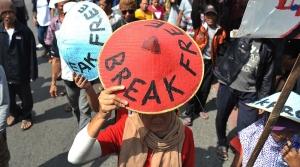 Australia, Turkey, Philippines… Throughout the month of May, activists have mobilised to put some countries to face their contradictions. Because our leaders lack the courage to tackle fossil fuels, citizens must take action. (Article extracted from Liberation, 15 May 2016)

The “Break Free” operation is a “wider civil disobedience movement in favour of the environment and the climate.” As 2016 was recorded as the hottest year in history, thousands of people on the six continents took audacious action to keep fossil fuels in the ground. For example, 300 persons invested the largest surface coal mine opened in the UK, South Wales, which had to suspend its activities on that day. The next day, in the Philippines, nearly 10,000 demonstrators converged to Batangas City, where JG Summit Holdings plans to build a coal plant of 600 megawatts, demanding the cancellation of the project. On May 8, they were 2000, including hundreds kayak to block the largest coal port in the world in Newcastle, Australia. Coal, the most fossil energy emitting greenhouse gases (GHGs), was also the target of action in Turkey, Indonesia, South Africa and Brazil. But oil and gas have also got their protests lots. Particularly the most controversial, whether from oil sands (action in Canada and the US), obtained by hydraulic fracturing is used to exploit shale gas and oils (Brazil and USA) or from offshore drilling (Nigeria and the United States) or threaten national parks (Ecuador).

Each time, the idea was the same: “Keep the pressure to force the fossil industry as well as local and national governments to implement policies and new investments needed to free us from fossil fuels completely and accelerate a just transition to be 100% renewable,”explained the the organizers. Why want at this point to address the fossil fuels? Because they are the primary cause of climate change: they account for over 80% of global CO2 emissions and 65% for all GHGs.

Global coal consumption dropped since 2014 and the industry suffered serious setbacks, as illustrated by the bankruptcy in April, of the first American producer, Peabody. Meanwhile, corals are dying at an astounding rate, the Pacific islands are engulfed and fire are destroying even, ironically, Fort McMurray, the boomtown symbol of excess Canadian oil sands.

Bangladesh has a warm, rainy and humid tropical climate with temperatures climbing up to 45 degrees